I lived in the Kaimuki house for a year and lived to tell about it.

If you’ve lived in Hawaii for more than a few months, chances are you’ve heard the legend of the “Kaimuki House”. I actually wrote an article about it at my last blogging gig in October 2015. The original house of horrors is gone, in its place is a bland two-story duplex that blends in so seamlessly you would never notice it unless you were looking for it. Despite the onerous, terrifying, dilapidated house being gone, the legend throughout the local community remains strong.

I can see why people were scared of it

Here’s some more background on the place from another source so you know I’m not exaggerating.

Here’s a description of the demon “Kasha” from my previous article:

The creature said to reside in the Kaimuki house is called a Kasha, a man-eating ghost from Japanese folklore. Other interpretations of this monster include a ghoul who lives around crematoriums and feeds on the dead, and a cat-like demon from the sky who steals away bodies. However, all three versions have one thing in common: its insatiable hunger for blood and corpses. (Realhaunts.com)

“My husband, who left me, is to blame” – One of my favorite quotes of all time 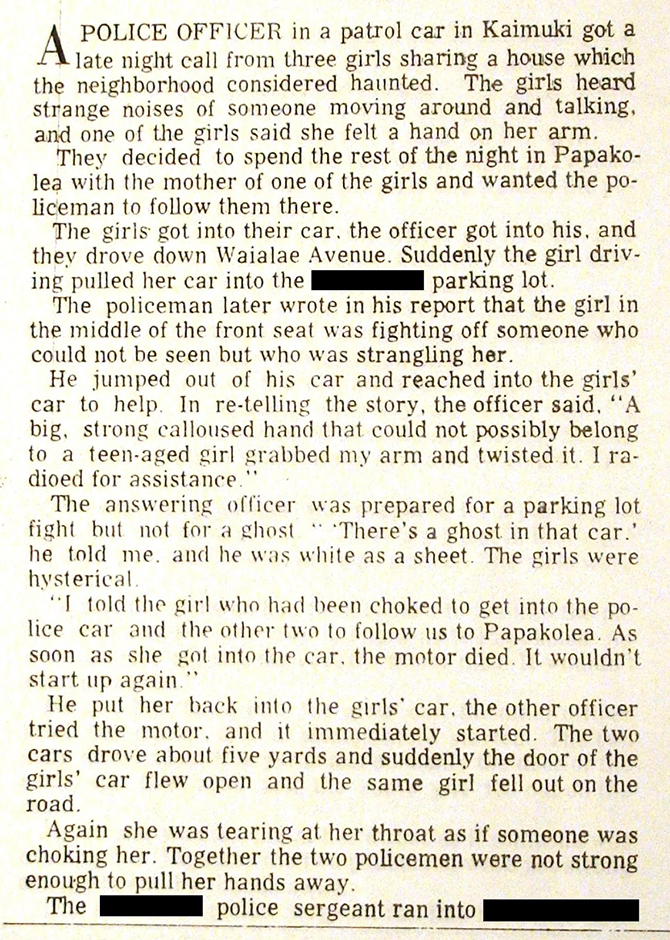 So it can leave the house to strangle you. Great.

Due to a series of unfortunate events, this is where I live now. I remember writing this article thinking, “Even if you don’t believe in ghosts, why chance it?” and “Who would be stupid enough to live in that house?”

Me.  Well, me and my roommates.  We’re stupid enough. Being desperate for a place to live results in hasty, impulsive decision making that ends with you living in a ghost house. Finding a place to rent in Honolulu is a nightmare, so you tend to gloss over a lot of the negatives, including a corpse eating demon roommate.

I was floating around different apartments after I broke up with my ex that ranged from “bad” to “terrifying”.  I found a great place in Diamond Head and thought I hit gold until I found out my landlord/roommate was:

I tried talking to him about it but he started going off on how he had taken enough acid back in the day and he could now see the future, and God, or his version of God, was telling him that this was his destiny. After hearing that, I decided I needed to move not within the month but within the next few days before I was killed in my sleep.

My friend and I had been looking for spots and got denied on a few applications when he informed me of a duplex in Kaimuki that some of his friends had just moved in to.  The place was brand new (a rarity in Hawaii), big, clean and cheap. Also, we would be sharing a space with what seemed like cool people. I signed a lease without hesitation because I was in fear for my life and also ready for something more permanent.

Right after moving in, I had an epiphany one night after I was going through the tedious task of changing my address online.  Oh my god, I’m living in the ghost house. Albeit a new, improved ghost house, but if the movie Poltergeist has taught me anything it’s not the house that’s haunted, it’s the sacred Indian burial ground it’s built on.

After discovering this, we banded together as roommates and set forth some ground rules:

We’ve been responsible for the most part. Or as responsible as you can be living in a haunted house with years of documented ghost stranglings.

I still wasn’t that worried because our landlord and his entire family lives upstairs and have been there for some time. Surely if the demon was still there they would’ve left long ago. Unless they were apparitions created by the ghost to lure us into the place. A thought I strongly considered for the first month.

I was hoping to have some kind of horror movie experience. Why? I needed writing ideas and I was certain this would fill the void. Also, I could sell the rights to my story and make a truckload of money from The Conjuring 5.

The haunting parts I experienced weren’t nearly as bombastic or visceral as the horror movies I’m used to watching, but it still left me deeply unsettled.

I’m not a superstitious man, I believe what I can see. I think ghosts are the result of people attributing creaky noises and doors slamming in old, poorly designed houses to supernatural phenomena.

I’m skeptical by nature and not easily convinced. But I had a few nights in this house that made me question my longstanding beliefs.

Why didn’t I move? As I said, finding an apartment in Hawaii is a nightmare. Also, most of the time, the place was quiet and peaceful. Plus my roommates were cool, and having them around gave me a false sense of security.

Each ‘supernatural’ experience I had unfolded in the same way. I would wake up at exactly 4:33 AM each time as if I had just been injected with adrenaline. My room would be ice cold and before I could get my bearings every internal alarm and gut feeling I had told me that something was very, very wrong. There were no sights or sounds to confirm my anxiety, but my internal alarms would be blaring. Following my abrupt awakening, every smoke alarm in the house would beep once. They aren’t connected to a central hub, they’re all battery powered in separate rooms. Yet they would beep in unison.

I have a portable AC unit in my room that is programmed to cut off once the temperature hits 72 degrees. I never change it. I turn it on when I go to sleep, it turns itself off. In the mornings when Kasha was all pissed off, my AC unit would get the room down to 60 degrees. It’s a low-cost unit and isn’t nearly powerful enough to make a room that cold.

The room temperature wasn’t the haunting part, it was the cold feeling in my chest. It felt like being stabbed by a white walker. My veins were filled with ice water and I thought my life force was being drained out of me. My chest was tight, I struggled to breathe. No matter what I told myself to calm down, the feeling crept through me like a virus until I could barely move.

You know the feeling you get when somebody is staring at you? When your instincts alert you even when you can’t see the person? It was like that. On these occasions, I would literally run out of my room, tripping on the covers and slamming into the ground as I flew out of my bedroom door. Once I was in the living room, I was OK. Looking back into my room, it felt sinister. It’s supposed to be my literal safe space, but it looked like it wanted to eat me. Again, no visual evidence to support my claims, just a feeling deep in the pit of my gut.

The next night, everything would be back to normal. It took a few days to adjust to sleeping peacefully again, but I would eventually acclimate to it.

From an outside perspective, this could be attributed to my general anxiety disorder and depression. I have a tendency to feel paranoid because of these issues which would explain the feeling that something was watching me. But I’ve lived with these things forever, I know what they feel like. This was completely different. I’ve never had a panic attack sleeping or waking up. I’ve never felt anything but safe in my house/room (except for the instance above with the crazy roommate). If it was one time, I could explain it away. But it was 3, and they all unfolded identically.

While I think there was a ghost that lived there, it wasn’t “Kasha”. Kasha is a Japanese demon with a flaming lion head that would steal corpses out of coffins and feast on them. Something I would have definitely noticed.

Whatever haunts that house, it’s mostly respectful. Judging by the myths I heard from the neighbors, it used to be much more aggressive. Former tenants of the previously demolished house were observed literally running away with their family and throwing what belongings they could carry in their car before SKRT SKRT-ing out of the driveway never to be seen again.

I can say that 99% of the time, the place was great. I had 8 different roommates in the time I lived there due to people constantly moving out of state or finding different spots to live. I made a lot of friends, and unless they failed to tell me, none of them had the same experience I did. I’m guessing I lived in the spot where everybody was murdered. Something I’m going to avoid in the future.

Myths travel fast on an island

As this all was unfolding, I had at least 5 different people walk by while I’m outside doing laundry say something along the lines of, “Brah you LIVE IN THERE?  Ho brah.  You meet Kasha yet?” Or something along those lines. Most of the local homeowners were in disbelief that I would put myself in such danger.

According to several people I talked to, nobody had stayed in the house for more than 3 months after moving in. There were stories of Asian families fleeing in terror. Every neighbor who had been in Kaimuki for the past 10 years told versions of the same story. I used to think the “ominous warning from a concerned neighbor” trope was a predictable, contrived plot device in horror movies. Turns out it’s fairly accurate.

Unlike the previous tenants in the older house, I did not have to run away screaming after a month in the place. I think the new house has lessened Kasha’s powers a bit, or it’s realized the error in its ways and matured into a much more respectful ghost over the years.

Like most ghost stories, the legend is much more interesting than the reality. Do I believe the house is haunted? 100%. But it’s more of a “light” haunting. I don’t know how close I was to the demon ripping the soul out of my body, but whatever it was that happened was mild in comparison to the other Kasha experiences I’ve read about. I didn’t get choke slammed or have ghosts walking around and talking all night. It kind of just hung out in my room and made it really uncomfortable once every 3 months. Dick move for sure, but manageable.

I’m thankful to be moving out without having to break the lease or having my soul and corpse being eaten and subjected to an eternity of unimaginable horrors. And I probably missed a few haunting nights because I was passed out drunk. There were far more good times than bad, and I don’t regret it for a minute.

Overall 7/10, would get haunted again.

Thank you, seriously. I promise you won't regret it.